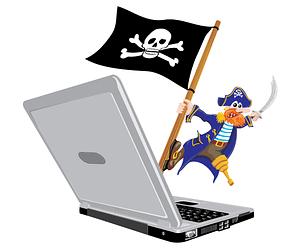 Software usually isn’t actually purchased. It’s licensed. The license is what gives a user the right to use it. End-users often use software in violation of this license, such as sharing copies or installing software on multiple computers beyond the scope of the license.

If you use software outside the given constraints, you are pirating that software. For example, if you get a one-user license for a piece of software, but then install it on five machines for use by five people, which is beyond the scope of the license, that’s piracy.

However, many people don’t understand that it’s piracy. Consumers commonly share their passwords and movie files, for example. They will also search online for a file or “free” piece of software and click on a link without giving any thought to whether it’s from a legitimate source.

The Five Types of Software Piracy

This type of piracy is when you take a physical product and replicate it. Forgers will create similar-looking packaging with logos, copy discs, and create inserts that appear to be the original product. They then sell it far below the typical sale price if you were to buy it from the publisher.

Before the delivery of software over the internet, this was a significant problem for major software companies such as Microsoft. That’s why they added a holographic image on their packaging as a certificate of authenticity. That way, customers knew whether the product came from Microsoft or if it was a counterfeit.

In the US, the Digital Millennium Copyright Act — written more than 20 years ago — requires software publishers to notify each online platform of each infringement. It’s simply not possible to find, track, and notify every instance. Even if you were to find every occurrence of piracy, 70% of takedown notices do not lead to the removal of materials.

It’s like a game of whack-a-mole. Authorities can shut down one download or peer-to-peer network and another one pops up somewhere else. Links can be shared freely with unauthorized distributors in a variety of ways.

Just because users agree to your EULA (End User License Agreement), it doesn’t mean they will abide by its terms. One study showed that 70% of online users said they found nothing wrong with online piracy. Younger consumers who grew up with social media sharing are even more likely to pirate software and content without guilt.

One example is using a student version or home version of the software for business purposes.

People regularly lend their software to friends, family, or colleagues. According to the Software & Information Industry Association (SIIA), one out of every four copies of business software is used illegally.

In this case, more users on a network are using a central copy of a program than are allowed by the licensing agreement.

Piracy can also happen by users unintentionally.  Unscrupulous computer resellers may install pirated copies of software onto a computer in order to make a sale, and the purchaser would be none the wiser.

The High Costs of Software Piracy

Software vendors and companies lose nearly $46 billion annually to piracy. Using licensing controls inside your software is like putting a lock on the front door of your software. A well-implemented licensing system can generate far more revenue by enforcing license compliance.

The loss of revenue for software companies is high, and goes well beyond just people using pirated copies of their software. For example, there are labor costs for supporting customers. If you don’t know who your licensed users are and how many computers are licensed, you could end up supporting people that have pirated your software.

Without management, software users are anonymous. People using pirated software could have access to download newer versions and updates of the software without paying, costing software companies significantly more.

Another significant cost comes from a poor user experience.

Malware from unlicensed software is estimated to cost companies nearly $359 billion a year.

When the software with licensing controls is run, a license check is performed. Here is a common example:

Using this process, copying can be detected by checking the fingerprint every single time the software is run. If the user was unaware that they were using an unlicensed copy, they would be provided an opportunity to purchase the necessary license. The Software Alliance reports that organizations implementing a robust software licensing program can achieve as much as a 30% savings in annual costs.

Can I Implement a Licensing System Myself?

Absolutely, but there are a lot of moving parts and it’ll be cheaper and safer for you to use an existing, already proven system. You'll need a tool that:

Licensing is the central point of your company’s revenue strategy. Flaws in the system’s design are costly and can send you down a path of pitfalls. Additionally, with operating system updates, patches, and the myriad other threats to your software as it runs on customer computers, ongoing upkeep of your licensing business logic is required.

Using a software licensing company can give you not only the tools you need, but the expertise in how to make those tools work to your advantage and generate the maximum amount of revenue for your business.

You work hard for your software. You deserve to get paid!

If you’d like to learn more about how to stop software piracy, implement copy protection and licensing automation, talk to the experts at SoftwareKey today or sign up for a free trial.