Would you like Southern Fried Green Circuit Boards with that? A good reminder to check your backups! 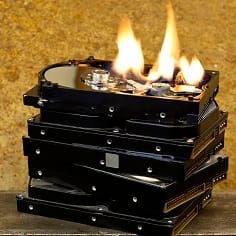 I am certain that every doctor inevitably gets solicited for free medical advice by their friends and acquaintances just as every attorney is eventually asked for pro bono legal services. If your friends and neighbors happen to ask you to “take a quick look” look at their computers as often as mine do, I once saw a perfect T-shirt that said "No, I will not fix your computer."

While visiting my chiropractor for a routine adjustment several months ago, he asked me “Hey, our server has been running slow, do you mind taking a look at it sometime?” Well, he has always been a nice guy to me. On top of that, his last experience of having a so-called technical specialist work on his office server involved someone dispatched from a big-box computer retailer, so…..well, as legendary radio commentator Paul Harvey would say, now you know the rest of the story. I felt sort of sorry for him — how could I possibly refuse his request and still have a clear conscience?

What unfolded during this next several days and months was — to put it mildly — quite interesting and certainly prompted me to subsequently perform a complete review of ALL of the SoftwareKey backup systems.

As I started to look “under the hood,” the chiropractor (and business owner) proceeded to tell me that the last techie to work on the server had to replace “some connector” that had gotten fried during a power surge. When I started digging into the guts of the server, I found out that it contained two hard drives in RAID 1 configuration (mirror set). Using RAID 1 in a server offers some redundancy, but upon rebooting the server I noticed that the BIOS was reporting that one of the drives had failed. Yikes! It turns out that they had been running the server with a single drive for quite a few months!

OK, that’s obviously not a good thing, but it’s something that can be easily resolved. And even if that single drive had crashed or otherwise malfunctioned, surely all of his patient data was being backed-up on a regularly scheduled basis, right? Right? The saga continued to unfold before my horrified eyes…..

I then noticed that there was a portable hard drive attached to the server and decided to look at the timestamp of last successful backup. Since the Windows Event Log was overwriting older log entries, I could only deduce that for the past 6 months, there was not — gasp! — a single, solitary successfully completed backup. Who knows when the last successful backup took place!

Fast-forward about 3 months, when I upgraded the chiropractor’s server to something newer and noticeably faster. While preparing the old hardware for recycling, though, I almost fell into a state of shock when I looked at the two SATA hard drives supposedly in RAID 1 configuration. Take a peek for yourself: 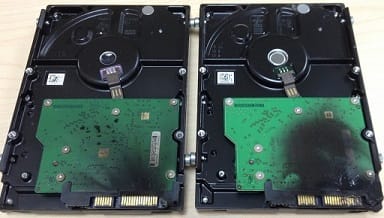 Yes, this doctor’s office was running his entire office patient management and billing system on a single hard drive with no redundancy, a once-emerald green circuit board now partially blackened due to a power surge (which occurred despite the fact the old server was running on an uninterruptable power supply!) and, most inexcusably of all — NO BACKUPS!

Once I picked my jaw up from the floor of the server room, I was left with several mind-bending questions:

Not only did the new replacement server run much faster and also have a RAID 1 configuration, but I also worked with the chiropractor to ensure that the server backups were being regularly scheduled and successfully stored on a portable hard drive. During this period of discovery, we also learned that the vendor of the patient management software offered a complete off-site backup of all patient data for as little as $40.00 per month. Less than $500.00 per year is a relatively small price to pay for the peace of mind that comes with the knowledge that you will never have to rebuild your business with an empty database. I stressed to the chiropractor and his office manager the vital importance of watching for the daily emails from this service indicating that the backups were successfully made.

Moral of the Story

Take a few minutes to make sure that your important data is covered by a backup plan and the backup plan is running successfully! Desktop software such as ShadowProtect is amazing and portable hard drives are, to put it bluntly — cheap. You have no excuse whatsoever to not have every file on your computer backed-up (at a minimum) on a portable hard drive. There are also many cloud backup services that will automate the process of getting your important files backed-up and stored offsite. If your files contain sensitive information, be sure to research which vendors provide file encryption services.

For those customers who are using the SoftwareKey Licensing System tool Protection PLUS SDK or Instant Protection PLUS, here are some recommendations on files to make sure are backed up: